[Recensie] Samson of Dol was an early medieval monk, abbot and later bishop who preached the Christian faith in the Celtic lands of what is now Wales, Cornwall and Brittany. He was probably born at the end of the fifth century and died in the middle of the sixth century. Like so many of his early medieval colleagues, he was thought to be so holy that later he became venerated as Saint Samson of Dol. Also just like a lot of his contemporary counterparts, this holy man deserved a biography in the eyes of his admirers. In the case of medieval saints, this took the form of an uncritical hagiography that emphasized the extraordinary holiness and exemplary behaviour of the specific churchman. In the case of Samson, this hagiography is the Vita (Prima) Sancti Samsonis (VIS) or First Life of St Samson. The Life probably dates from the end of the seventh or beginning of the eighth century, around 700 CE, although the exact dating of the Life remains a matter of debate, as is proven again in this very volume. In the Life a lot of information is given about the otherwise largely unknown history of Wales, Cornwall and Brittany in the early medieval period. The Vita not only treats the life of Samson himself and his spiritual development but also tells us something about the spread of Christianity in the region in the period before the saint makes his appearance.

This volume is a collection of studies drawn from the broad spectre of scholars investigating the contacts between early medieval Britain and the Continent, Brittany in particular. Contrary to what is customary in medieval hagiographies the family of saint Samson plays an important part in his Vita. A plausible explanation for this is the aim of the hagiographer to silence critical voices. Samson seemed to have taken good care for his close family, securing for them positions in various monastic foundations. To discredit claims of nepotism, the author of the Vita probably opted for a flight forward, as Richard Sowerby shows in his article.

Joseph-Claude Poulin examines in his contribution the text of the Vita in order to reach a suspected date of creation. In doing so, he considers the use of an older hagiography in the creation of VIS, which seems probable. The use of sources by the hagiographer of Dol that weren’t commonly known in Brittany before the eighth century leads Poulin to a dating somewhere in the eighth century, before the Carolingian renaissance. Caroline Brett investigates the different paths the cults of St. Paternus and St. Samson went through medieval history. She compares them with a hare and a tortoise, St. Paternus being the hare who’s cult made a quick start with an early hagiography. St. Samson however, lasted longer and endured greater fame as the tortoise, due to political changes in western Francia in the seventh and eighth centuries and because of his use of a new style of self-promotion by monastic communities via a royal-backed cult centre that ensured the needs for long-term commemoration and veneration. In his article Ian N. Wood explores the possibility of a certain British tradition in clerical movement to the Continent. He takes the case of St. Samson who, with British churchmen as perhaps Gildas and Ninnian, undertook a voyage or peregrinatio to Brittany and into the Merovingian world. The voyage of Irish holy men such as saint Columbanus decades later can be seen in a different perspective in this way. Not so much as a new departure in Insular asceticism, but as standing in a tradition already well established by British predecessors.

A comparison between the Life of St. Samson and the apostolic text Ratio de Cursus is subject to Constant J. Mews’s piece. He shows that the writer of the Life seems particularly concerned about the position of Samson as a bishop without diocese as opposed to established bishops, mirroring the political situation in Francia in the seventh century. The Ratio de Cursus focuses on the primacy debate between the Irish/Gallican liturgies and the Roman liturgy that was central to the eighth century. Jonathan M. Wooding scrutinizes the nature of Samson’s monasticism and his peregrinatio to mainland Europe as it was written down and described in the Vita, while Karen Jankulak tries to find evidence for a medieval cult of St. Samson in Wales. Evidence for any cult of the saint in Wales clearly lacks, she concludes. The only references that can be thoroughly trusted, date only from the twentieth century.

This leaves us a lot wiser about saint Samson and the position of his Vita in early medieval historiography. Much light has also been thrown on the nature of Samson’s life and his spiritual voyage as well as on his worldly tours. What received perhaps a bit too little attention is what can actually be discerned from the Life about early medieval society in Wales, Cornwall and Brittany. This is of course a difficult subject to tackle, because the writer of the Vita was mainly concerned with the spiritual and monastic affairs around Samson, but an article about it would not have misstood in this otherwise very interesting collection. Perhaps an opportunity for a future project. 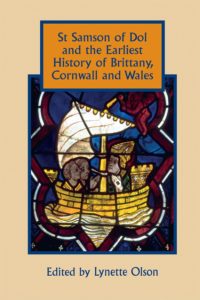 St Samson of Dol and the Earliest History of Brittany, Cornwall and Wales