A new perspective on Europe’s Celtic past

[Recensie] In The Ancient Paths. Discovering the Lost Map of Celtic Europe Graham Robb unfolds a truly revolutionary theory concerning the pre-Roman Celtic civilizations in Western Europe. In his book, Robb claims to have found the key to the unraveling of an extensive and sophisticated Celtic road network that already operated long before the Romans set foot in Gaul. Before his research on the Celts, Robb wrote several books about the history of France and Paris. This latest piece focuses on the territory that was to become France; Celtic Gaul.

Robb divides his book into four parts; in the first he introduces the reader to the Iron Age world and the mystery of the Mediolana, places that were used as points of reference when constructing the Celtic roads, according to Robb. The second part deals with the druids in Celtic society, whose knowledge and scholarship were instrumental in projecting and implementing the road system across Gaul, Britain and Ireland, as the reader will find out. In part three Robb elaborates further on the druidic study and their use of solstice lines in designing the roads and paths that connected the important Celtic places with each other. The fourth and last part of the book consists of an implementation on Britain and Ireland of the discovered logic behind the road system.

Already in the beginning of the book, Robb debunks the myth that the Roman army introduced straight and travelworthy roads in Gaul to replace the muddy tracks the Celts used. Although it is known among archaeologists that many Roman roads were built upon older Celtic ones, this knowledge is scarce among the general public. Therefore the author’s vivid description of archaeological Celtic chariot finds to underline the probability of decent Celtic roads is more than welcome. While unveiling his findings in detail, Robb is watchful for the label that could easily get stuck on his work when writing about subjects like ‘extraordinary sophisticated’ ancient civilizations; a fantastic made-up epic of assumptions and wishful thinking. To avoid this he spent months on research trying to falsify his results, obviously in vain since the book lies here before us. The main point Robb’s book is all about is that there existed a pre-Roman Celtic road network in Gaul that, as will become clear later on in the book, was based on lines of longitude, latitude, and most importantly, the paths of the sun; the summer and winter solstice lines. The author starts however, with the introduction of Mediolana to the reader. He unravels a comprehensive pre-Roman road network, with target points that were used as medians in the construction of roads; these places were called ‘Mediolanum’. Quite a lot of these places can be located through toponymic research even today. However, Robb seems to get carried away now and then by his own findings, as in the case of the toponymic search for ancient place names. Toponymy is a not very reliable research base, something that becomes clear when Robb reveals modern Leiden in the Netherlands as the Celtic Lugdunum (fortress of the Celtic god Lug). Recent research has revealed that the naming of Leiden as Lugdunum originates with the Dutch rebels from the sixteenth century and their search for ancient ‘Batavian’ origins during the Dutch Revolt.

Robb begins his story with the Via Heraklea, the straight ancient road from the ‘end of the world’ at the southwestern tip of the Iberian Peninsula to the Alps. According to legend this road was made by the demi-god Herakles. An interesting point Robb makes here is his assertion that Celtic myths contain a lot more correct historical information than their Greek and Roman counterparts. He brings up a few examples to makes this plausible and it is not unlikely that because of the Celtic tendency to maintain an oral culture and their refusal to write down their uses and past, some of their history can be found in ancient tales, be it in a very distorted way. Another pitiful consequence of the Celtic aversion to writing is the unhampered slander campaign Roman and Greek contemporaries could aim at them, with the stereotype ‘barbarian’ image that is still dominant today as a result.

According to Robb we should forget our image of the Celts as being technical and architectural less developed. Also, the stereotypical image of the druid as a wizard like bearded figure wandering round in a white robe is a nineteenth-century invention. As Robb makes clear, the druids should be regarded as an elite of politicians, judges and scientists who were located in the middle of Celtic society and were instrumental in achieving wider political coalitions with other tribes in times of war.

The second part of the book deals with the scientific development of the Celtic world and especially astronomy and cartography. Robb takes the reader to the first discoveries of cartography by the Greeks and the calculations of lines of latitude and longitude. The voyage of the Greek explorer Pytheas (c. 325 BC) is used as a first example. The two following chapters on druidic science that follow are most intriguing. The druidic knowledge, and the religion they practiced, were both based on mathematics and geometry and not on superstitious assumptions. It would take too long to elaborate further on the various specific claims Robb makes here about Celtic science but he presents his findings in a truly intriguing manner. Unfortunately there is simply too little evidence, archaeologically or otherwise, to bring home his numerous assumptions without raising questions. However, we can still highlight some interesting ideas to be found in the book.

The discovery of Pi by Archimedes around 200 BC is still regarded as one of the most important discoveries in the history of mathematical science. Robb states that the Celtic system of measuring distances by lines of longitude, latitude and summer and winter solstice lines proves that in the druidic system the most accurate approach of Pi had been reached some 100 years before Archimedes. One of Robb’s examples is again the Via Heraklea, which was built exactly in an angle of Pi divided by two. Another example where the druidic road system based on the paths of the sun comes into view is formed by the Celtic migrations of the fourth century BC. What seems to be an unorganized mass migration of tribes into lands unknown was in fact a thoroughly prepared voyage, in absence of a compass guided by the lines of the summer and winter solstice.

However, in his treatment of Caesar’s Gallic war, Robb shows that he is not a professional ancient historian. He argues that in their eight year long struggle the Celts persisted in unsuccessful tactics, which is demonstrable not true. When one looks at the course of the war, an evolution from pitched battles to hit-and-run tactics and guerilla warfare is detectable, culminating in the scorched-earth policy of Vercingetorix in 52 BC. Also, Robb lets himself be misled by Caesar’s businesslike way of writing. Instead of approaching Caesar’s reports with care because of the latter’s hidden political agenda, Robb treats his account as being the undisputed truth. The same applies to the author’s use of numbers from Caesar’s texts, for the use of numbers in ancient texts is known to be notoriously unreliable. Another example is the near extinction of the Nervii tribe as mentioned by Caesar, which Robb copies without hesitation, although Caesar contradicts himself a bit further in his book when he claims that the Nervii were again contributing thousands of warriors to the war against him. Robb also follows in Caesar’s use of the Rhine river as a frontier between Celtic and Germanic peoples, a clear fabrication of the Roman general. In Caesar’s time ‘Celtic’ tribes, where the La Tène-culture was dominant, lived on both sides of the river and the mentioning of the ‘ferocious’ German tribes was probably especially done by Caesar to impress his Roman audience at home.

After the Roman invasion of Gaul Robb crosses the Channel to Britain to see if the druids implemented their road system there also, and this forms the last part of his book. At first glance it seemed as if this wasn’t the case, because the 11:7 ratio the druids used in Gaul couldn’t be found anywhere on the islands. However, since the solstice lines are different in Britain than they are in Gaul, Robb was searching in the wrong direction. He eventually found a pattern that used a 4:3 ratio, and thus a pattern of roads and Mediolana was revealing itself also in Britain. Was in Gaul Mediolanum Biturigem the center of the network, in Britain this turned out to be Oxford. The legendary ‘Four Royal Roads’ form an ancient remainder of this Celtic road pattern. Robbs finishes with Ireland where he also detects some intentional ancient mapping. He also explains the existence of many early Christian monasteries and places of worship along the ancient routes. This was caused by the Christian encapsulation of pagan religious practices in the new Christian religion.

Of course more research has to be done to prove or disprove parts of Robb’s theories, and he pleads for this himself, but reading his book will at least change your idea about the ancient world and especially the place Celtic society had in it. The choice of the Celts to store their knowledge in the minds of their learned people instead of writing it down gave the Romans the chance to write them down into history as a barbarian tribal agglomerate, which they eagerly took. An important role in Robb’s book has been assigned to the druids, and although Robb’s claims about them are fascinating and providing a lot of food for thought, simply too little is known about this class of Celtic society to say much about them with certainty. The sometimes scaring far-reaching claims and explanations Robb provides in his book make it sometimes hard to keep following his argument, as in the cases of his en passant discoveries of the possible location of Camelot and of the long-lost site of the Battle of Mons Graupius. The unusual way of providing notes to his work doesn’t help in trying to check his claims. Robb does not use numbered endnotes but instead his unnumbered notes can be found per chapter and mentioning the part of the sentence from the text they’re relating to in that chapter. On the other hand, a lot of The Ancient Paths consists of hypothesis and assumption so ‘facts’ in the usual sense can’t be verified anyway.  Nevertheless, Robb writes with vigour and generally succeeds in painting an intriguing and partly plausible picture of Celtic society in ancient times. And if future research proves his theories to be false, he at least rehabilitates the Celts and reserves for them a more honourful position in the pantheon of ancient peoples, while providing historiography with a far-reaching broad viewed visionary work on the ancient Celts. And of those books, encouraging and accelerating future research, the historical industry can hardly have enough. 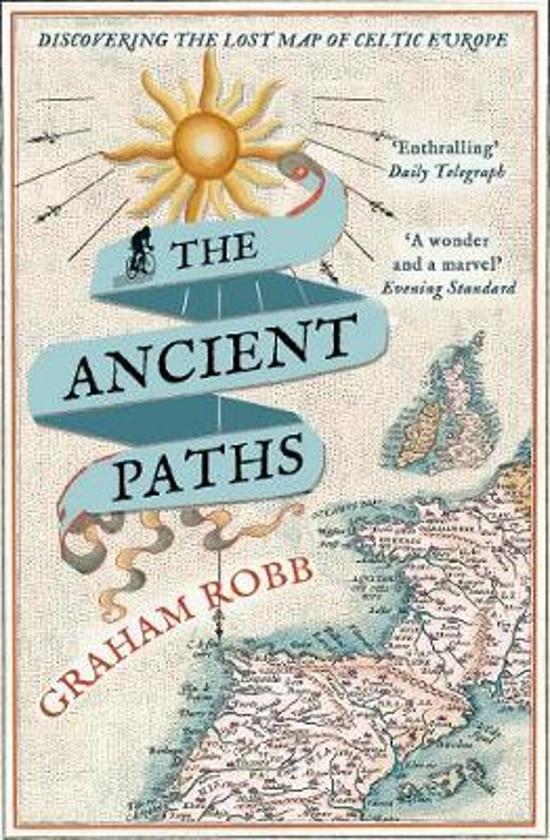