[Recensie] In his latest book, archaeologist J.P. Mallory tries to trace the origins of the Irish people in the mists of history. In order to trace back the beginnings of a distinct Irish people who shared common cultural traits transcending the level of tribal affiliations, Mallory goes back to the period before the first newcomers from Britain, the Anglo-Saxon monks and Northumbrian attacks from the 7th century. He therefore starts his account with the half-legendary High King Niall, son of Eochaid Mugmedón, founder of the famous Uí Néill dynasty. Before reaching the life and times of this famous High King however, Mallory takes the reader for a journey along millions of years of ‘Irish’ history, starting his story at the very beginning of the planet Earth! After explaining how Irelands geological features came to be, Mallory follows the first settlers of the island in their footsteps. These ‘Irelanders’, as Mallory calls them, came to the area not earlier than around 9.000-8.000 BC, most probably from the Mesolithic hunter-gatherer communities at the other side of the Irish Sea with the Isle of Man, Wales and Scotland being their most likely former dwelling places. Mallory makes a special case for the Isle of Man basin as the previous homeland of Ireland’s first colonists. Rising sea levels in the Irish Sea could have led to a Manx ‘Atlantis’ where inhabitants had to flee westward to the resource-poor Ireland in order to escape the rising water.

The next key moment in Irish history comes up circa 3.800 BC, when farming was first introduced on the island. The replacement of the indigenous Mesolithic culture by the dominant agricultural Neolithic one seems to have taken place rather swiftly in Ireland. At the end of the Neolithic we see an increasingly similar culture emerging in both Britain and Ireland, focusing on astronomical features and the circle as special figure.

With the coming of the beaker using people, from both Britain and Atlantic Europe at the end of the Neolithic, metallurgy was introduced in Ireland. Beaker culture spread fast throughout the island and Ireland was incorporated into a wider European trade network through the Beaker folk. By the Middle and Late Bronze Age we see increasing contact between Ireland and Britain, a lot of cultural features were being shared, such as the orientation of houses, types of ceramics and metal manufactured weaponry and artefacts and the erection of hillforts. Deposits such as the Tamlaght hoard suggest even incomers from the continent in this period.

The author agrees with the latest views that there wasn’t any major population movement into Ireland that caused the adoption of the Celtic La Tène-culture. Instead, La Tène style was merely adopted by indigenous populations and thus this feature of Celtic culture travelled by trade and contacts rather than invasion and conquest. This also explains the local variations in Celtic art in various parts of Europe, each population adapted it to its own customs, thus changing the style a bit, although it remained recognizable.

Mallory writes very entertaining, especially nice is the chapter in which he describes the own origin myths of the early medieval Irish. In this section Mallory investigates the origins of these myths created by the early medieval Irish monks, and the link with the story according to which the Irish originated from Iberia. This story however, although very intriguing, cannot be maintained he concludes. Eventually he discerns the early medieval Irish belief of originating from a godlike figure who was lord of the dead and the underworld. This connects to Caesar’s writings from antiquity in which he stated that the inhabitants of Ireland believed they originated from Dis Pater, the Roman god of the dead, afterlife and underworld.

The chapter on the genetic origins of the Irish is an interesting brain exercise, but not very rewarding, as simply too little is yet known in this field of research, and there is nothing specifically ‘Irish’ about the population at the prehistoric times under scrutiny. Mallory’s treatment of the introduction of the Irish language is also of great interest. There probably have been various language shifts in Ireland in prehistoric times, and although the author makes very clear we cannot know for sure when Celtic Irish was introduced, he believes it most likely between 1.000 BC and 0 AD. The introduction of hillforts and the rise of a warrior elite might have been mechanisms that ensured the spread of the new language.

Mallory ends his search for Irish origins with an examination of the five-province cosmological principle in which Ireland consists of the four nowadays known provinces under the dominant fifth province in the centre, with its capital at Tara. The author makes a case for tracing the origins of idea back to the Iron Age, since all ‘five-province’ sites are Iron Age sites and remnants from that period are actually quite sparse. The early medieval idea advocated by the Uí Néill about the five-province Ireland therefore might stem quite probably from the first centuries BC. This would mean there was already some form of sense of nationhood or ‘togetherness’ among the Celtic ‘Irish’ from the Iron Age onwards. Therefore the Iron Age, according to Mallory, should be where we should trace the origins of the Irish. With that statement Mallory finishes his wonderful journey through geology, archaeology and history. A recommendation of this book to anyone interested in Irish history is definitely in place here. 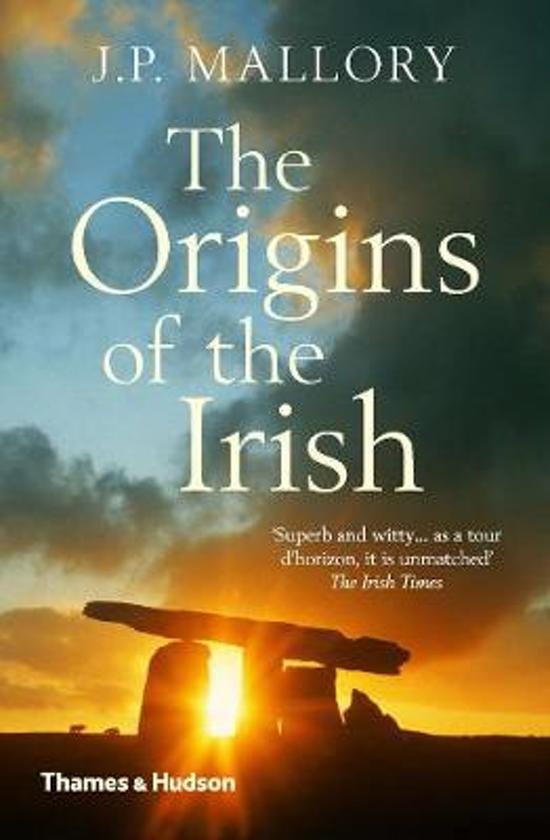 The Origins of the Irish